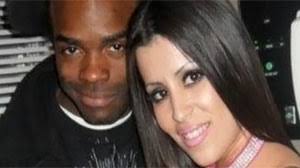 According to the Review Journal, Griffith on Wednesday testified in his own murder trial that he had to call 911 six times because of domestic violence problems with “Fantasy” dancer Debbie Flores Narvaez.

In a June 2010 incident Griffith said he found a threatening note on his car after leaving his job as a dancer with the Cirque du Soleil show “Love” at The Mirage.


“I will kill you before I let another bitch have you. I will find you where ever you hide. Love always, your Destiny,” he said.
You can write to Jason Griffith at:

I don't know that Debbie abused  Jason, however men can absolutely be the victim of domestic violence.  People may laugh, but it's no joking matter. If you are a man who is being abused and you don't want to call the police, leave for your own safety and find a support group online where you can receive the support and encouragement you need to get on top of your own life.