In season three, episode 17, we see A Lethal Love, the true story of the murder of Adrian, Farrah, and Alton by Frances Newton. and the love story of Adrian Newton and Frances Newton which doesn't end well for Adrian, Farrah, and Alton Newton.There have been many television shows on this crime.
This show is described as High school sweethearts are torn apart when their children are murdered. There is no evidence of a boyfriend. Her only motive appeared to be greed, to collect on their life insurance policies. Many claim there is no evidence, but that simply is not true.
Frances Newton was sentenced to Death and is not eligible for release.

You can not write to Frances Newton as she was executed on September 14, 2005 by lethal injection. 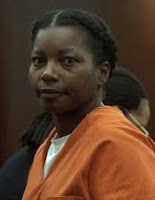 While some death penalty cases are questionable, when that is true, the state is hesitant to execute. There was considerable evidence against her, both from witnesses and physical evidence. If you want more money, work harder or more often. Life insurance is not the way to generate income.