With this Bullet, I thee kill Carla Hughes and Avis Banks, Keyon Pittma

In seaason 1, episode 1, we see the love story of Avis Banks, Keyon Pittman  and Carla Hughes. The only person who gets away unscathed is Keyon as Carla kills Avis, and is sentenced to life in prison, still protesting her innocence to anyone who will listen.
The show is titled "With This Bullet, I Thee Kill" and is described as: A passionate relationship, a new home, a baby on the way: Avis Banks and Keyon Pittman seem to have it all, until Keyon returned home to find his beloved fiancé lifeless on the floor. In their hunt for Avis' killer, investigators unearth a twisted love triangle, and a secret lover with a deadly obsession.
This is hands down the strangest trial I've ever seen. It had everything - allegations Keyon killed Avis (which for a crazed stalker, shows you how selfish she really is....), craziness! In my opinion, she was proven guilty beyond a reasonable doubt easily by the state.
According to the state,  Pittman met Hughes in August 2006 at Chastain Middle School, where they both were teachers. They became friends and began a sexual relationship. Pittman testified that Banks had been unaware of his relationship with Hughes. According to Pittman, Hughes had remained in the relationship despite her knowledge that Pittman planned to marry Banks and that Banks was pregnant with his child. Pittman said Hughes had referred to him as her “future husband” when they were around Hughes's friends and relatives. Pittman also testified that Hughes had been unhappy that Pittman would not leave Banks. Pittman testified that he repeatedly had told Hughes that he was not going to leave Banks to be with her, even when Hughes believed that she was pregnant. He said that on one occasion, Hughes had started to drive to Pittman's and Banks's house to reveal her affair with Pittman, but Pittman had stopped her by threatening to call the police. Hughes had known where Pittman and Banks lived because she had been there on three prior occasions.

According to Wiki, On the night of November 29, 2006, Avis Banks, a daycare worker, was found shot and stabbed to death in the garage of her Ridgeland, Mississippi home. Her body was discovered by her fiance Keyon Pittman, and it appeared as if the perpetrator had kicked in their back door. After discovering the body, Pittman called his co-worker Carla Hughes. Hughes was later interrogated by police, where she initially denied her sexual relationship with Pittman and later denied having access to a gun. However, Hughes's cousin indicated to police, via an attorney, that he had lent a loaded .38 caliber 5-shot revolver to Hughes shortly before the murder, and that she had returned the gun empty.Hughes was originally charged with accessory to murder after the fact, but on December 8, 2006, the charges were upgraded to two counts of capital murder.
You can write to Carla Hughes at: 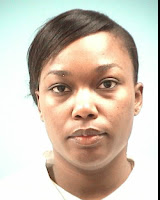