In which we actually release Glyph Quest Chronicles into the wild, albeit in a limited fashion. 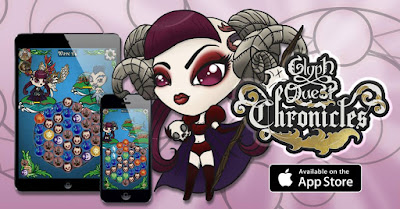 That statement is false.

It is almost done. The technical side of things is what we would term at MVP* and, as such, we are able to release it. So we have - at least in a few territories.

This is known as a

The idea is that you do a genuine release to a select few territories and see how it goes. This will enable you to tweak the odd variable here and there and ensure that, when you finally ship to all territories, everything is working optimally. A final chance to iron out the kinks, if you will.

As the old saying goes "You never get a second chance to make a first impression" and this has never been more true than in the mobile market. Without spending a ridiculous amount of money on UA**, the vast majority of your downloads will occur within a short period of launch. At this point it should be stated that this is assuming that you've been Featured***.

So you'd better make sure that, when the Feature comes around, you make the most of it. That means that your monetisation had better be working as well as it can be because it's very unlikely that you'll have as good a user base as you do in that Featured period.

How do you know your monetisation is working?

You look at graphs. Lots of lovely graphs. Even if you implement nothing else, Apple's own reporting will show you just how many people have downloaded your game and how much revenue it has generated. Apple's system is actually pretty good, if a bit basic in scope. The data comes in each day, so the information is pretty up to date.

The problem is that this information just gives you an overview. You can't tell, for example, where that money is coming from. Is it one person buying a ten dollar gem pack or 10 people spending a dollar each? Is anyone actually buying the 5 dollar pack or would you be better off making the 50 dollar mega pack more prominent in your store?

And that's where Analytics come in.

You can hook these up to just about anything in your game. They can be used to harvest all kinds of data related to how the player is playing. What level they've got to. How long it took to get there. How many times they've visited the shop. What they bought when they got there... Did they actually buy anything? How many times did they visit before they bought something? The list is endless.

This will give you an incredibly valuable data set to look at and enable you to make much more informed decisions about the balancing of your game and monetisation.

We've got points that tell us whenever a player completes a quest - successfully or not - and how long they took in doing so. As one of the main resource sinks is upgrading gear, we get told whenever the player does that. Likewise with Alchemy when the player trades in one type of resource for another. We also know when people get prompted to fill up their mana - and whether or not they spend currency to do so.

Now I'm not going to pretend to tell you what makes a good analytic data point. The truth is, I don't really know. We think that the ones we've implemented are probably a good start but there's undoubtedly more we could include. I'm also not entirely sure how we're going to be able to interpret the data itself, but I do know that we're going to need as much of it as possible to be able to make the key decisions.

Which brings us to an interesting point.

You can't be Featured under Best New Games if you've already released in that territory.

Makes sense, right? I mean, you're no longer a New Game to them. This means that we've got an interesting balancing act between getting a large enough user base to extract meaningful data and sacrificing the Feature in those territories.

Certain territories are more popular with soft launches than others - New Zealand, for example. I think it's something to do with the fact that it's an English language territory that happens to be at the pointy end of the international date line, meaning it generally gets stuff a few hours before anyone else. Either way, New Zealand appears to be the king among soft launch territories.

Then there are other territories that you absolutely wouldn't 'waste' on a soft launch - the US or any of the EFIGS**** countries. These represent where the bulk of your potential downloads are so you really want to take full advantage of any Feature you can get there.

Your choice of target territory, therefore, has plenty of variables to consider. CSR Racing, for example, was soft launched in Saudi Arabia. The reasons behind this were mainly to do with the expensive car culture that was prevalent over there. It did astonishingly well...

Again, without a huge spend on UA, we're probably having to cast our net a little wider than just one, focussed territory. We've gone for Norway, Sweden, Denmark, Finland, Singapore and New Zealand. The Scandinavian territories have been chosen largely because they're pretty tech-savvy and comfortable with English. Singapore is in there to give us a clue as to how the Asian market is likely to respond. New Zealand was chosen for tradition?

How this is going to work out is anyone's guess, but rest assured that I'll keep you posted as the data comes in.

So yes, we're almost done. Now we just need to find some way of maximising our user base in those territories, analyse the data, make a few changes, create a whole bunch of new marketing materials, release the game worldwide, respond to more user feedback and get on with even more promotion to ensure that the whole enterprise doesn't just fall on it's arse.

* Minimum Viable Product. You can ship it now and it won't break but there's more stuff you want to include later.
** User Acquisition. Methods of getting users to try your game - adverts, marketing, promotion, bribery, blackmail...
*** If you haven't been Featured, then all bets are off and... well, let's just say you're going to have an uphill battle regardless of how good your game is.
**** A localisation acronym. Refers to the languages English, French, Italian, German, Spanish.