Leanne is getting worked up about a Kotaku article. Normally I just let her rant for a bit, but this got me thinking and, in the spirit of lovely Top Ten lists, I present to you my...

Top 10 Playstation Era Games I'd Like To See Remade With Modern Tech. 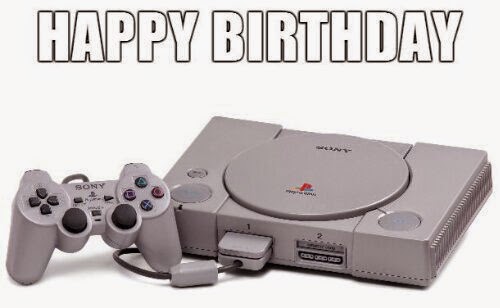 The astute amongst you will also note that this also ties in with the noble PS1's 20th birthday. It's nice when things work out like that.

Rules:
So, in no particular order...

Build and program robots, then let them fight each other in an arena. Talk about niche... It subsequently found a home on Sony's various handhelds in Japan but never really caught on anywhere else. I'd love to see one with a very comprehensive damage model - robots limping around, still trying to unleash death. Or taking hits to the core and having its program corrupted in a Core War style. Maybe even introducing EMP-style weapons to do just that.

A platformer... in first person. It shouldn't be possible, but it was. It worked because during the descent of each jump, the camera looked down at Flash's feet so you can see where you were going to land. Now imagine that with VR and try not to throw up.

Boom! Such destruction! Much carnage! So explode! Super contrived story involving a nuclear missile that had to have a path cleared for it which ultimately ended up with the player flattening everything around it. Somehow this is better than letting it explode even though the end result looks pretty much the same. Never mind - give me this in whatever guise the next Frostbite engine takes.

Co-op, side-on brawler. Think Final Fight with swords. So many characters to unlock and level up. Graphics were pretty primitive, even by the Saturn's standards, so I'd love to see something nice and crisp - although still 2D and traditionally animated.

A fighting game with genuine peril. No health bars. One mistake; one slip, and you were dead. Duels were a dance - a deadly ballet of poise and patience, culminating in one furious maelstrom of slashes, lunges, parries and thrusts. Nick an artery and it's all over.  It even had a bonkers first-person mode where you could link two consoles together and fight each other that way. Now imagine this with updated characters and an even more comprehensive damage model. Tear clothes. Lose limbs. I want that feeling I had the first time my brother beheaded me in Barbarian.

I know it's been done - several times. But that doesn't mean that there shouldn't be a new one, right? I mean if Gran Turismo can keep churning the same thing out, year on year, why can't we have something for futuristic hover-racers? Since everyone's getting all het up about the new Star Wars, let's have some Pod Racing or Speeder Bikes. Oh, and no guns - let's make it all about the racing. I'd love to see a proper modern take on Power Drome*.
...

And that's where I ran out of games. It's not that there aren't enough to chose from - there are plenty that haven't made the list - it's just that the ones that I really enjoyed playing wouldn't really benefit from the latest technology. In fact, many would be actively hampered by it.
There were plenty of games that we used to play to death in the office. Some examples:

4 (or, indeed 10) player carnage. The ultimate party game? Remember what happened when someone thought it would be a good idea to throw some polygons at it?

Cheating a little here as by the time the series reached the PS1 it had already fallen foul of an extra D which really didn't help the game at all. Let's be clear - the originals weren't without their problems, but the move to 3D just added more of them.

You could include just about any puzzler here - Super Puzzle Fighter, Puzzle Bobble, Puyo Puyo, Tetris - none of these games would benefit by any fancy tech that wasn't available at the time. Just make the graphics sharper and leave everything else well alone please. Kinda like Super Puzzle Fighter II Turbo HD Remix really. While you're at it, give Rainbow Islands a bash as well.

It's very easy for me to get a bit misty about games-gone-by. Just writing this post made me think about a simpler, happier time. It's also very easy to snap out of it when you find footage of said games and realise just how primitive they seem.
I might try this again but with a broader base to choose from. That would mean I could include things like Ico or Lotus Turbo Esprit. But then, in theory, we've got The Last Guardian and GTAV covering us there.

Games thrive on constraints. When designers are forced to come up with gameplay solutions to cover up technical constraints is when the magic happens. Give them a blank canvas and they tend to get carried away. Or people spend so long focussing on the marvellous technology that they forget to put a game in there at all.
Look at Minecraft. Okay, despite it's pretty simple aesthetic, there is some hard-core tech there, but the point is that it's not a very good game until you start introducing constraints. As soon as you move in to Survival mode, it's the restrictions that make it fun. You can't build this thing until you have the resources. Don't fall off high ledges. You shouldn't go out at night. Sure, things like the Better Than Wolves mod may take it a step too far for some people, but you get the idea.

Now how about Star Citizen? Or even Elite Dangerous. Two titles with substantial budgets that seem to be on the verge of letting the player do anything and everything he wants to in a simulated Entire Galaxy. Star Citizen, in particular, looks like a directionless mess with multiple teams working on completely disjointed feature sets. Then again, with the amount of money at their disposal they might just pull it off. Either that or they'll keep raking it in from the sales of virtual spaceships** and continue to speculatively add features whilst never actually releasing the game so as not to break this vision of ultimate fantasy that everyone has for it.
Of course there are some notable exceptions - GTAV springs immediately to mind with its "let's do anything and everything" approach whilst simulations like Gran Turismo and Forza will always benefit from extra polygons or faster physics calculations - but the general rule is that good gameplay doesn't require technology. Note 'general'. But the key thing that binds all of those titles together is that the underlying gameplay was pretty damn solid before the introduction of the technology.

Or No Man's Sky which looks amazing but is born out of a pretty serious resource restriction*** so has to get around that with some very cunning use of the technology**** they have.
I guess what I'm trying to say is that technology should enable gameplay, not just be an end in and of itself.